Oktoberfest ((Warning a LOT of Pictures))

Oktoberfest was held this weekend at the Choctaw Creek Park in Choctaw, OK. On the weekend before and the week right after Labor Day of every year, Old Germany Restaurant, the City of Choctaw and the Choctaw Chamber organize a now 7-day Oktoberfest under 30,000 sq-ft of tents and pavilion featuring German food, beer, wine, dancing. There will be 2000 seats with some 40,000 people in attendance over the span of the event.


This is an event my family likes to try to attend every year as they can experience a little bit of their German heritage for an evening. The decorations were fun and the music was engaging and lively. We brought a friend with us this year. My husband met this dear lady years ago in the multilingual department at a job he once had and she has become part of the family ever since. They both sang some of the German songs and danced a few dances and just had a really good time.

The food was delicious…oops, I forgot to take pictures because I was too busy eating it!! My boys just had frankfurters on buns, my husband and daughter had Knackwurst on buns and I went for the bratwurst meal complete with red cabbage and a super yummy, German potato salad. They also split a huge soft pretzel later that evening.  They tried several different types of German beer and split a pitcher or two and I enjoyed my free soda’s since I was the “DD” designated driver. :-)(duh, I hate beer).

Savannah had a good time listening to her Daddy singing different German songs that were played over the course of the evening and watching all the shows and people dancing from young to the old and groups, lol. We sat next to a hilarious group of young people that just had a really good time and we had a good time watching them. 😛 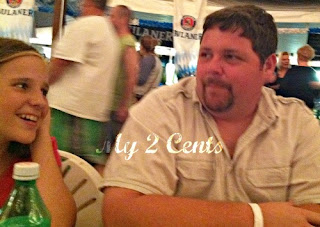 The boys had a period of time where they were getting a little bored with it all but a little iPhone camera fun. Ryan was a goofball and loved the camera. Ryker was, of course, standing behind me playing with my hair and just thought it was neat seeing himself of the camera. 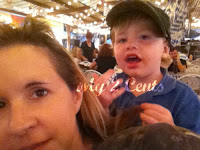 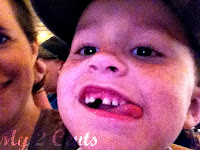 There were several people that came dressed in old time German garb which was very beautiful. I especially loved the dressed the women wore. Not sure I got any pictures thought. The other thing that caught the kids eyes were the cowboy hats people were wearing with lights around the brim, lol. One guy here even put the two together. 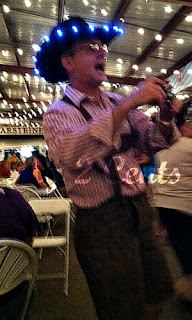 It was a really fun night that I think we all will remember for a long time. It’s not often we get out as a family so we cherish the times when we can.
I hope you all had a great Labor day weekend too.
I will post a couple German shows in the next post.