I have been following a blog that caught my eye on someones sidebar because they were talking about a baby girl name Riker. My 2.5year old son’s name is Ryker so I was intrigued and wanted to see this sweet baby girl. I was immediately in love. This sweet little angel is fight a tough battle though and her poor mama has some really hard day too during this fight they are currently fighting. Here is Riker’s introduction on their blog. 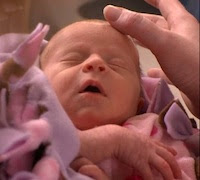 Riker Star Dresser was born to Tory and Jon Dresser on February 16, 2011 in Lewiston, Maine. Riker had it rough early on when she was born three weeks premature and required to stay for observation for several days following her birth. Shortly after, she was diagnosed with colic and gastrointestinal complaints, but no one imagined that the real underlying cause of Riker’s first difficult days may have been a diagnosis she received on June 5, 2011. Riker had a cough. Everyone assumed it was a common cold, but when her cough seemed to get worse, the Dressers brought little Riker to the Emergency Room. It was there that the doctors picked up on some peculiarities in the infant’s condition. At the tender age of three months old, Riker was diagnosed with Acute Myeloid Leukemia, a condition rarely diagnosed in infants. Now, Riker is staying at a hospital in New England dedicated to helping this child succeed during the long and difficult road ahead. Her parents are doing everything they can to be with this little girl and to nurse her back to health, but their resources are limited and time off work means their needs are mounting. Meanwhile, Riker’s older sibling, 2-year-old Valentine Echo Dresser, keeps asking where her baby sister is.

After numerous obstacles they have gotten to the hardest part so far I believe. As Riker’s mom put it a few days ago,“She’s been taken to the brink of death for this transplant and now we’re keeping her alive while we wait for Valentine’s magic seeds to plant in Riker‘s bones. All we can do is treat each obstacle as it happens and try to keep her comfortable.” The doctor’s keep assuring her everything is happening as expected but it’s so heartbreaking and hard for me to watch as an outsider I can only image how Riker’s mama is feeling. Riker’s daddy is back home miles away with her big sister while mom is in it for the long haul at the hospital alone with Riker. She has posted some pic’s and video of the crazy fight Riker is going through right now. Poor baby girl was sitting up in her crib trying to play through the moans of pain and with her eyes swollen shut just yesterday. I am not the best when it comes to words of consolidation and religion and hope that in sharing Riker with my readers some of you may find the time to help post words of encouragement and hope to her mama. I am glad to read that she was just able to see her other daughter Valentine which has really helped revive her for now. I wish I lived closer to them so I could be more support.  Thank you all for reading and for those of your who will take a moment on occasion to send words of comfort and encouragement their way. Big hugs Riker. You are loved in Oklahoma!! http://rikerstardresser.blogspot.com/