Have any of you heard about this new Ethanol gasoline,E15?  A higher blend of ethanol and gasoline, has rolled out in a handful of states. But its use in older vehicles is generating warnings from AAA, which says E15 could be harmful to pre-2012 vehicles.

It’s a higher blend of ethanol and gasoline and has already reached gas stations in a handful of states.  But using it in older vehicles is sparking warnings from AAA that says E15 could be harmful to pre-2012 vehicles.  AAA states that the Environmental Protection Agency and gasoline retailers should stop selling E15, a new ethanol blend that could damage millions of vehicles and void car warranties.  AAA says that 12 million of more than 240 million cars, trucks & SUVs now in use have manufacturers’ approval for the E15 blend.  Flex-fuel vehicles, 2012 & newer GM vehicles, 2013 Fords and 2001 and later model Porsches are the exceptions, according to AAA.

“It is clear that millions of Americans are unfamiliar with E15, which means there is a strong possibility that many may improperly fill up using this gasoline and damage their vehicle,” AAA President and CEO Robert Darbelnet tells USA TODAY. “Bringing E15 to the market without adequate safeguards does not responsibly meet the needs of consumers.” I am one of those millions that had never heard of this nor had my husband.

Some car companies have already said their warranties WILL NOT cover fuel-related claims caused by E15:  BMW, Chrysler, Nissan, Toyota & VW. Others like Ford, Honda, Kia, Mercedes-Benz and Volvo have said E15 use will VOID WARRANTIES, citing potential corrosive damage to fuel lines, gaskets and other engine components.

The accepted gasoline blend of 10% ethanol is pretty standard at most of the nation’s 160,000 gas stations, pushed by federal laws and standards designed to use more renewable energy sources and to help lessen our dependence on foreign oil. When push comes to shove by ethanol producers, the EPA approved the use of E15 — a 15% ethanol-gasoline blend.  This all happened in June even with the objections from automakers and the oil industry. A few outlets in Kansas, Iowa and Nebraska have been offering this fuel since July. If you come to a station offering this fuel you will see an EPA sticker stating E15 is safe for use in virtually all vehicles 2001 and newer.  AAA insists that the sale of E15 should be stopped until more extensive testing it done and until consumers are educated about this new fuel options and its potential hazards. 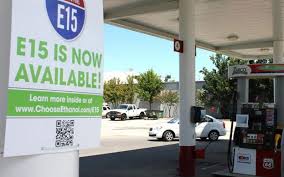 To the contrary, per a report on USAToday website,  Bob Dinneen, CEO of the Renewable Fuels Association, says E15 is safe for virtually all post-2001 vehicles, based on extensive government-sponsored testing. “We think the (EPA) warning label should be sufficient to notify consumers,” Dinneen says. “There are no corrosive issues with E15. If there’s an issue with E15 (damaging vehicles) we’re going to know about it, and the EPA is going to know about it.”

You can read more about this at the USAToday link above or simply google it.  I just wanted to let you know it even existed because I didn’t.  I wouldn’t have even been looking for it.